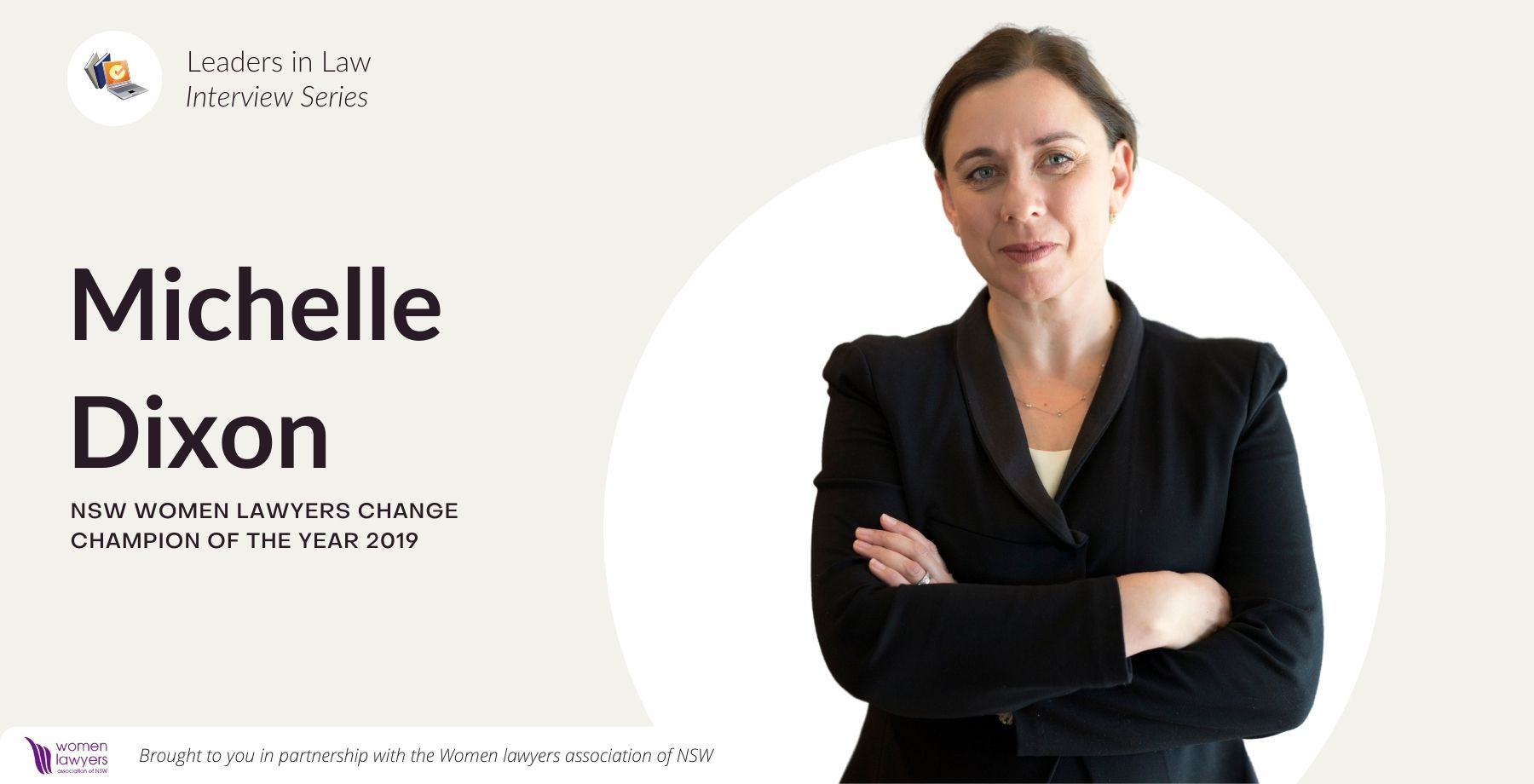 Ahead of the 2021 NSW Women Lawyers Achievement Awards, we spoke with Michelle Dixon, NSW Women Lawyers Change Champion of the Year 2019 and former CEO at Maddocks. Michelle has been recognised numerous times for her progressive and innovative take on leadership. She was listed on the AFR’s 100 Women of Influence in 2015 and received the Victorian Award for Excellence in Women’s Leadership the following year. We were delighted to have Michelle share with us her thoughts on what it takes to become a great leader, the importance of being authentic as well as the key women that have influenced her impressive career.

If you weren't a lawyer, what work would you do and why?

If you had asked me 20 years ago, I probably would have said an investigative journalist. But at this stage in my life... I think running a boutique hotel and restaurant would suit me. I think the main reason is the same one that I’m a lawyer. I love to look after people. I also love feeding people. I've actually been accused of being a bit of a food pusher!

That is a difficult question. Being in a leadership position in a law firm partnership is a fairly unique role - you don't have the ordinary executive powers that come with a corporate leadership position. And because the business owners are working in the business, you're also dealing with many competing interests.

But one of the most important things I've learned is to have a clear decision-making framework. My framework has always been: "what's in the best interest of the firm and the community that we serve?”. I found that without a framework, it's easy to get distracted by the loudest voices. But as a leader, I had to make sure that I was genuinely listening to everyone's opinions and open to questioning and challenging my preconceived ideas - only then could I make the best decisions.

“My decision-making framework has always been: What's in the best interest of the firm and the community that we serve?”

The last thing is to have the courage of your convictions. There will always be people who don't like the decisions you make. I would live with that as long as I knew that I'd based my decision on sound reasoning. Of course, I still made plenty of wrong decisions, and I needed to recognise that. But I think that as a leader, you need to be prepared to make the hard calls, stand up for things that aren't necessarily popular, and do that fearlessly. Of course, this is much more difficult than it sounds. In general, I think women are doing this better than men. Maybe because, for a long time, women have had to have the courage to push for change in the profession.

Looking back, which women in your life have had the most influence on your career?

There are probably two women that have had the most significant influence on my career. The first one is Liz Ryan, who was the head of People and Culture at Maddocks for many years. Throughout my career, she has been the most beautiful and honest support to me. I could always go to her for trusted advice, and she was never afraid of giving me her honest feedback. If she thought that my behaviour was not the absolute best that it could be, she'd say it. She has been a great sounding board, and you can't put a price on that.

The second person that comes to mind is Donna Hardman. Donna's a senior businesswoman and non-executive director. I first met her when I became CEO at Maddocks. She has no ego, is completely selfless, and is incredibly generous with support of other women. She is also as bright as can be and like Liz, was happy to give me honest feedback!

What does the term "authentic leadership" mean to you?

Obviously, "authentic leadership" means that you have to be yourself - you can't fully model a style of leadership you've seen before. After all, we're all different, and good leadership can take on so many different forms.

Being empathic is also incredibly important if you want to be an "authentic leader," and the importance of being empathic has been highlighted throughout the COVID-19 pandemic. There has been a real need for people to see that leaders in organisations genuinely care.

After all, we're all different, and good leadership can take on so many different forms.

I think the very core of being an authentic leader is staying true to your convictions. But in a politicised environment - and every workplace is politicised to a certain extent - sticking to your beliefs is not always easy. One of my proudest moments was when I stepped down as CEO, was when I received a note from a former chair of the partnership which said, "I'm so proud that you stuck to your convictions." That note meant so much to me.

What are your 3 tips for young lawyers that are striving to get into leadership positions?

I realise that my first point will sound contradictory to what I just said about being yourself, but I suggest finding leaders that you admire and ask yourself, "what is it about their leadership style that resonates with me?" and “how can I apply it?”. It's not a matter of copying their style but rather working out which traits and qualities align with who you are and your values. Then it's up to you to build and hone these qualities.

If you indicate that you're interested, people are far more likely to think of you when leadership opportunities come up.

My second tip is to be curious and open-minded. I especially think this is crucial for diversity. I’ve always reminded myself that while I'm a woman in law, I'm a white woman in the law, and with that comes great privilege. To be a good leader, I had to be genuinely curious to understand the perspectives of people who may have different traits than I do, or are not necessarily part of the normative culture of a law firm.

Lastly, show that you're curious about leadership and management! If you indicate that you're interested, people are far more likely to think of you when leadership opportunities come up.

What excites you about the new generation of lawyers?

Undoubtedly, their willingness to speak up, say what they want, and do things the way they want to do them. My generation fell into the trap of thinking that you had to work 20 hours a day or that people around you had to see you work hard to be successful. This generation isn't necessarily prepared to do that, which I think is a good thing. One of the things I was most delighted about when I was CEO was seeing the younger men in the business coming through and taking up paid parental leave after we introduced it. Before that, flexible work was, I think, seen as something primarily available for women with kids.

I think leaders can learn a lot from the generation of young lawyers that are coming through the ranks. The way they articulate what they want is fantastic.

Who is one person you really admire?

My sister. She has more energy than you can poke a stick at and is an absolute go-getter. She's had the most extraordinary career, and she's had the courage to do so many different things in business - and excelled at all of them. She is a great supporter of women and just a very generous, down-to-earth, and amazing person. 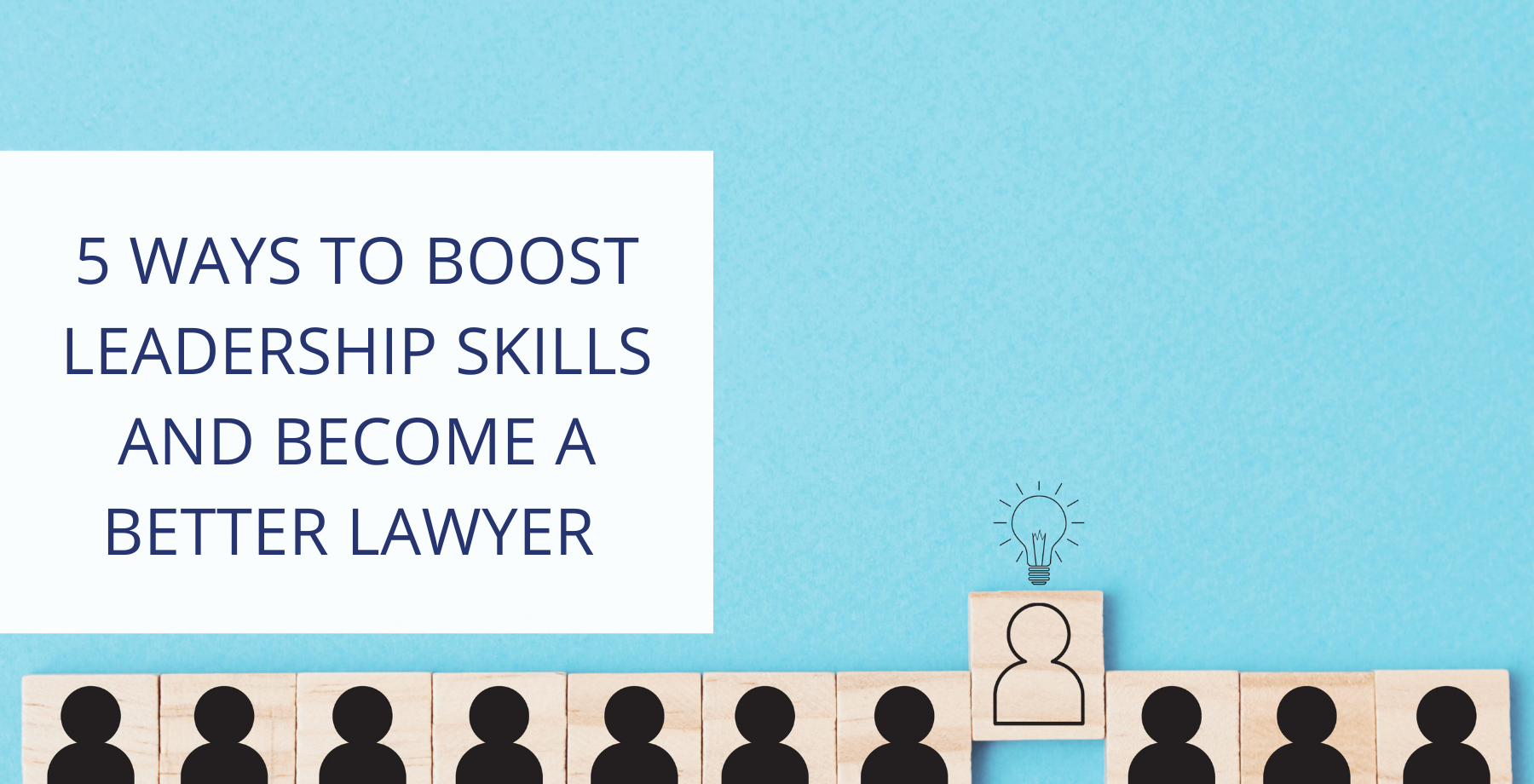