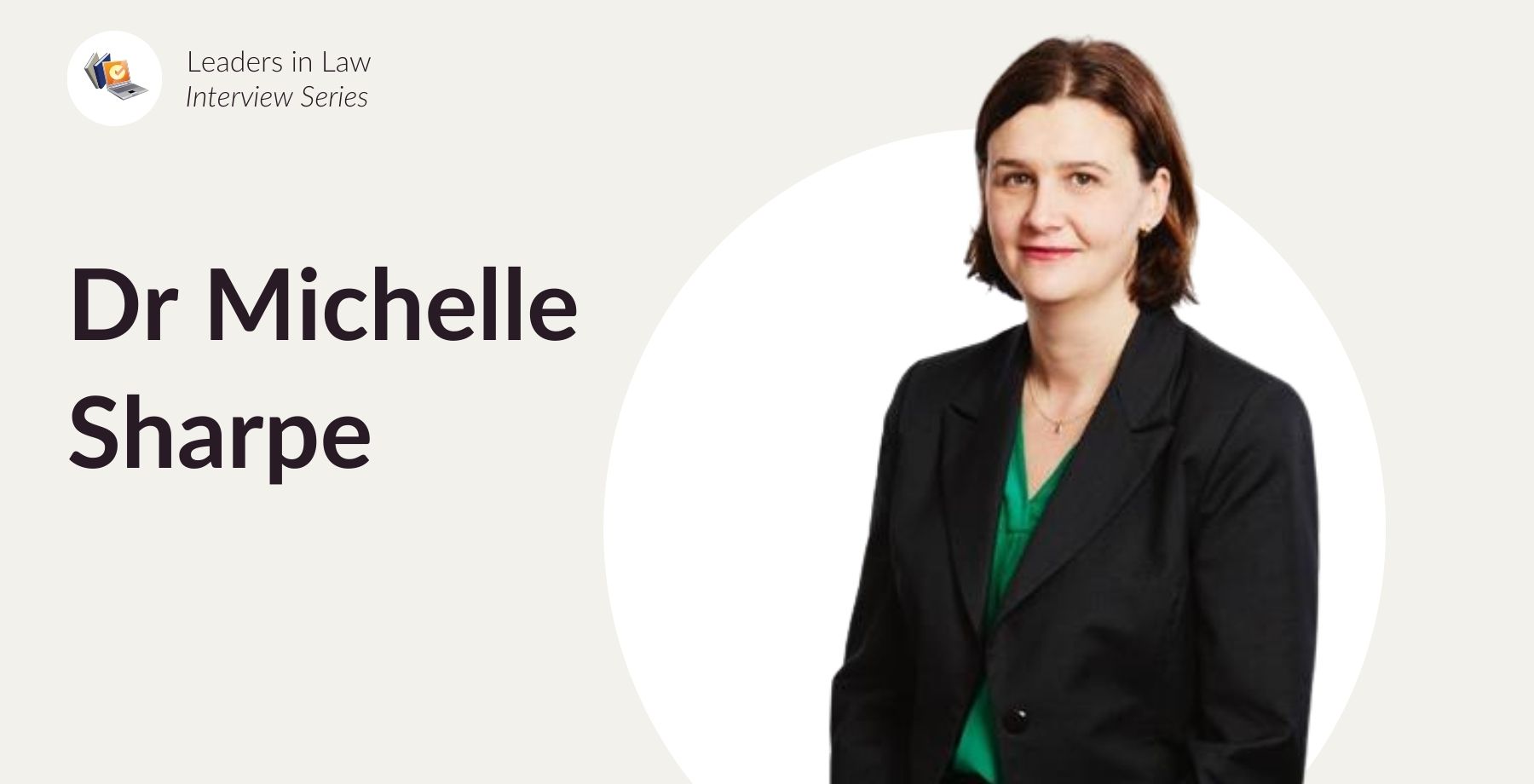 Michelle Sharpe has achieved a huge amount in her legal career so far. Since joining the Victorian Bar in 2002 she has co-founded the Health & Wellbeing Committee, been awarded a Doctorate, and most recently, published a book with Lexis Nexis on Unconscionable Conduct in Australian Commercial and Consumer Contracts.

We spoke with Michelle recently about the release of her book, her reasons for becoming a barrister, and her thoughts on wellbeing in the legal profession.

What inspired you to become a barrister?

As it happened, I was a witness in a threat to life trial at the age of about 11 years old. I didn’t make a particularly good witness because I was very nervous. As I walked into the courtroom I asked the tipstaff what I should call the judge. As he ushered me in he told me quite quickly that I should call the judge “Your Honour” or “Sir” – but I thought he said “Your Honourable Sir”. So later when I was under cross-examination the judge leaned over to ask me a question and I finished my answer with “Your Honourable Sir”.

It was highly amusing and everyone in the courtroom – except for myself – dissolved into laughter! I was mortified! But I was still utterly captivated and mesmerized by the court process and decided very firmly that I wanted to be a barrister.

I didn't know anyone in the law, and I didn’t have any relatives to guide me or provide me with advice. I was introduced to this world of law quite by accident, and I really fell in love with it. So it was this love of the courtroom that led me to study law and become a barrister.

What motivated you to pursue your doctoral studies?

I really enjoyed studying law – I might have been the exception there! This led me to do my Honours thesis, which I enjoyed enormously. I always wanted to go back and do further study, just for myself really. Initially I thought I would do a Masters, but what I really enjoyed was writing. So I decided to do a PhD thesis.

I was very interested in contract law at that time – particularly the idea of the freedom of contract and the exceptions to this idea. It’s effectively the idea that we’re all on a level playing field – except we are not. So I wanted to explore the idea of exploitation in contractual relationships. I did my PhD thesis in that area, and I always planned at some stage to write further on the subject.

This brings us neatly to our next question ... you have written extensively on a range of topics, but most recently you have published a new book “Unconscionable Conduct in Australian Consumer and Commercial Contracts” with LexisNexis. Can you tell us a bit more about what inspired you to write this book, and why is it important for lawyers to learn more about this topic? 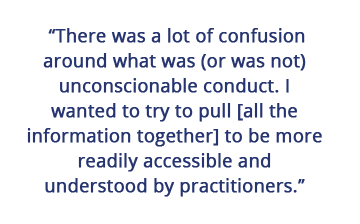 I was very lucky and fortunate that LexisNexis accepted my book proposal. I was inspired to write this book for two reasons. One is that I did my PhD thesis on the subject, and I always wanted to take some of the work I had done on this and have it published. The second was my own practice where I saw a lot of issues of unconscionable conduct coming up in the work I was doing. The legislation and principles underpinning statutory unconscionable conduct often aren’t that widely known.

I wanted to try to pull it all together to be more readily accessible and understood by practitioners. Really, the work was intended to be of assistance to a law student or a busy practitioner, who wants to have all the information at their fingertips.

You were a founding member of the Health and Wellbeing Committee at the Victorian Bar. What motivated you to get involved with the issue of mental wellbeing in the legal profession?

I pushed to have the Health and Wellbeing Committee established in 2006, which was my first year of being elected to the Bar Council. About two years later I worked with the chair of the Committee to establish the Barristers’ Counseling Service. 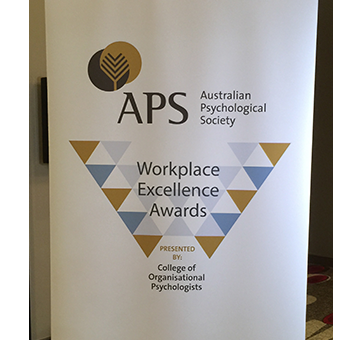 My motivation for founding and supporting these initiatives came from my experiences lecturing Legal Ethics at the University of Melbourne. One of the issues that seemed to emerge from the disciplinary cases was the mental ill-health of practitioners. This, combined with what I saw around me in the Law School and in my practice, really got me thinking about mental ill-health in the legal profession. I started reading the research done in the United States on this subject and it really struck a chord with me. It seemed like there were great similarities between what was been written about in the US and what I was seeing in Australia. But at that time there had not been any studies done on the mental health of the legal profession in Australia. It was only in 2007 that Beaton Consulting and BeyondBlue decided to add a couple of mental health questions into their annual survey of the profession. They were quite shocked with the results which showed lawyers were about 1.5 times more likely to report depressive symptoms than the rest of the population. But these findings fit perfectly with a lot of the US research.

I met a lot of resistance in the Law School when I started talking about the US research on mental-ill health in the law. A lot of people in the Law Schools either didn’t see it as an issue, or didn’t want to talk about it as an issue. At the time the attitude was “students will find out what legal practice is like soon enough, why depress them before they get there?” I was astounded with this response. Thankfully, this approach has since changed, and is changing further.

Is there a particular project or initiative you are particularly proud of during your decade-long involvement with the Health and Wellbeing Committee?

There are two things. The first was helping to establish the Barristers’ Counseling Service. When I left the Committee this service offered free counseling to barristers 24/7 and six free face-to-face counseling sessions. These sessions were offered at a site close to chambers but outside the legal precinct to ensure confidentiality. That was the key to this service – ensuring barristers could access it in confidence.

Second, was the ‘reporting back’ structure for the Counseling Service. This provided de-identified information about the different groups of people assisted and the types of problems they were presented with. This provided important information to the Health and Wellbeing Committee on the pressing issues that barristers faced. Through this ‘reporting back’ process one of the issues that surfaced was judicial bullying. Barristers were accessing the service to assist them in dealing with an incident - or incidents – of judicial bullying. Another issue that surfaced was how some members of the Bar were experiencing burnout – or were close to burnout. Once the Committee identified these issues we could run seminar programs which dealt with these topics in a general way. I believed that we needed a Health and Wellbeing Program at the Bar that provided triage – that is, counselling and support when necessary, but also a preventative health program.

What are some of the positive changes you have seen in our approach to mental wellbeing in the law in Australia? What further changes would you like to see?

Where I see there is a silver lining and hope for the future is that we’ve at least moved to having the conversation about the issues. So there’s hope we’ll have more real conversations where we actually start looking at the research and talking about what it says. Sometimes I think the conversations are happening at a very superficial level where it’s like “well, I feel okay, and when I don’t feel okay I go and watch a movie.” I think we need to move beyond the superficial and engage more with what we actually need to do to change things. 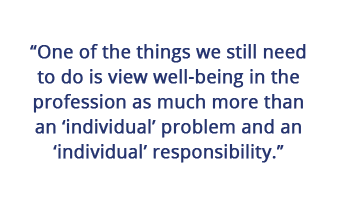 Although it can be a problem for individuals, and there is an aspect of being a professional that means you need to take responsibility for your health, it is a much bigger issue than just that. Some of the research suggests there are institutional cultural factors in poor mental health inthe law – so it is an occupational safety and health issue. It also means there needs to be an institutional as well as an individual response to mental ill-health in the profession.

The best illustration I can think of is a building site. When you are on a building site you have some responsibility to take care of yourself – to wear your hard hat and be aware of the dangers on the site. But I don’t think anyone would quibble with the fact that you would also expect the company that runs the building site to take precautions – to hand out hard hats and take steps to minimise the risks to their employees. I don’t think we are there yet with mental health in the law; in fact, we’re quite a way off from that realisation.

We also need to come to the realisation that the fallout of poor mental health in the profession isn’t just an individual tragedy – it has wider repercussions on the administration of justice and the standing of the profession in the wider community. Mental wellbeing impacts on how professionals make decisions, manage their workload, how they interact and communicate with their clients as well as their counterparts in court. All of these things impact on how the community views the profession.

To finish up, we've got three quick questions for you: 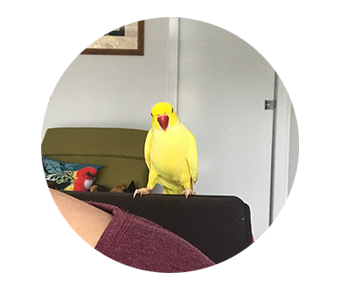 What’s your favourite way to wind down?

A good movie! I did take my daughter to see “Dangerous Minds” so when I say a “good movie”, sometimes my choice is constrained by family! I also saw “Mamma Mia” … which I didn’t hate!

What’s one thing you would tell your 15 year old self?

And last but not least, are you a cat person or a dog person?

Definitely a dog person! Although I keep a vain little parrot called ‘Sydney’ who is my writing companion.

Read more interviews from our "Leaders in Law" series here.

Disrupting Law Hackathon: 7 Innovative Ideas To Improve The Law
NEXT → 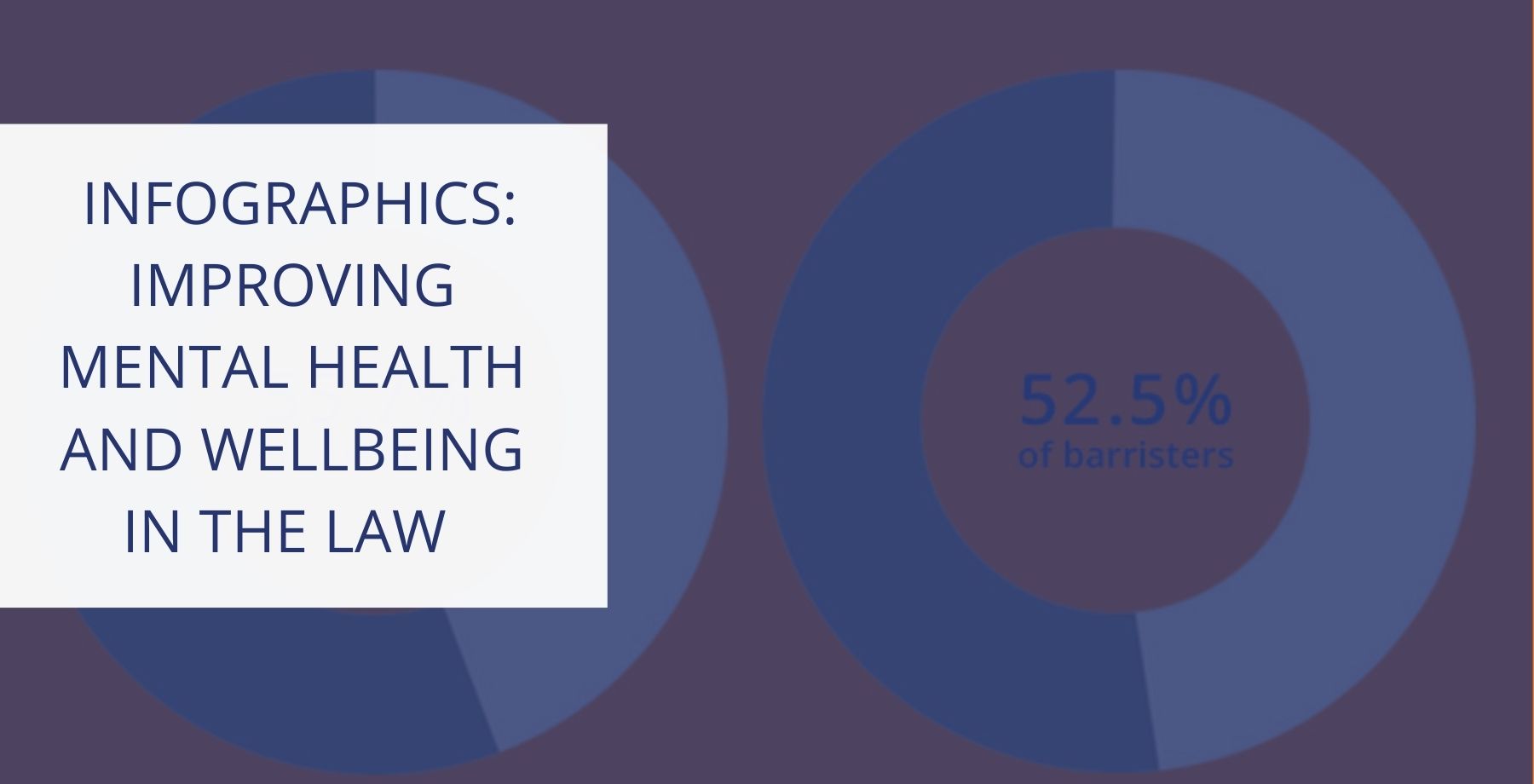